We will be STRICTLY seeing patients by appointment only.

Please see our announcement here for more information about our current services and the precautions we are taking. 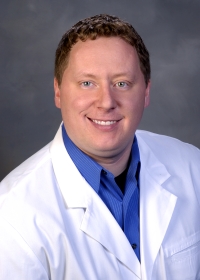 Dr. Oberdorf received his undergraduate degree in Neuroscience at the University of Pittsburgh. He obtained his doctorate degree at the Illinois College of Optometry in Chicago, IL. Upon his 1996 graduation, he performed a residency program at the Huntington VA Medical Center in Huntington, WV. He remained on staff at the V.A.M.C. for 2 years following completion of the residency program.

Dr. Oberdorf has called Raleigh home since January 2000. He served as the Clinical Director of TLC Laser Eye Centers – Carolina upon coming to Raleigh, overseeing the pre and post-operative care of approximately 3000 patients undergoing LASIK, LASEK, PRK, and CK at TLC.

He has presented lectures to the Eastern and Coastal districts of the North Carolina Optometric Society, other optometrists, health care workers, and organizations.

In June 2005, Dr. Oberdorf was named North Carolina’s “Young O.D. of the Year” for outstanding service to the community and to the profession of optometry by Vistakon – Johnson & Johnson and the North Carolina State Optometric Society.

Dr. Oberdorf is a fan of the Carolina Hurricanes but his fandom remains even stronger for his hometown Steelers, Penguins, Pirates, and ACC member Pitt Panthers.

Dr. Oberdorf and his wife, Tammy, an elementary school teacher, live in North Raleigh with their 2 children and a spoiled rescue dog named Stanley, in honor of the Penguins back to back championships.

“Stonehenge Vision Source has been a key part of my medical care plan for many years. They have consistently provided comprehensive vision care for both my preventive and treatment needs.”

You can schedule your next eye exam with us online!

Let's continue the conversation over on your social network of choice.

Leave Us a Review

Please take a moment and let us know how your experience was.